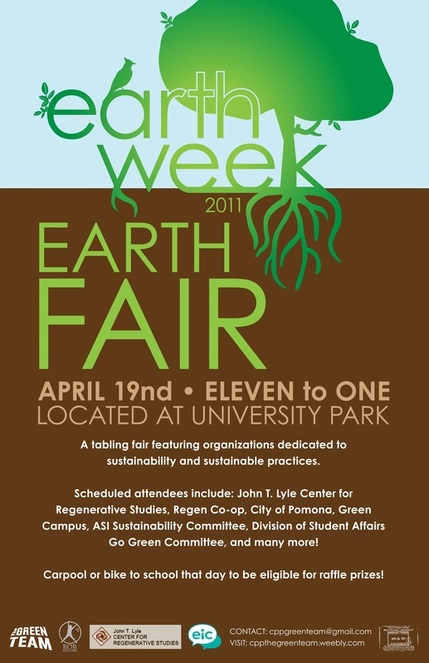 This tabling event will feature various groups and organizations centered around sustainability and sustainable practices! Come by for a fresh, local meal as well!

Carpool or bike to campus on this day to be eligible for raffle prizes!! 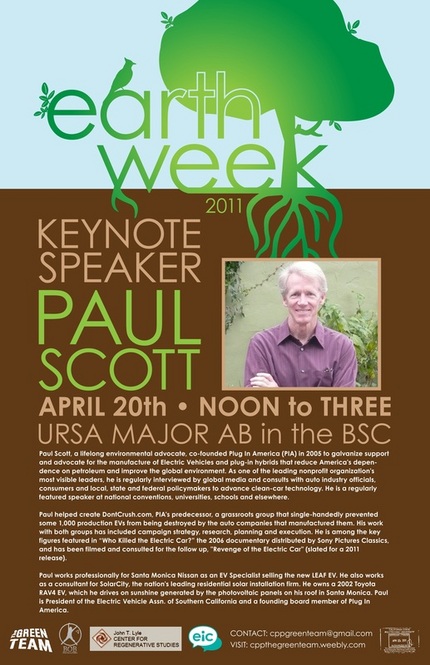 Wed., April 20th:
Speaker: Paul Scott; 12-3pm, Ursa Major AB
Bio: Paul Scott, a lifelong environmental advocate, co-founded Plug In America (PIA) in 2005 to galvanize support and advocate for the manufacture of Electric Vehicles and plug-in hybrids that reduce America’s dependence on petroleum and improve the global environment. As one of the leading nonprofit organization’s most visible leaders, he is regularly interviewed by global media and consults with auto industry officials, consumers and local, state and federal policymakers to advance clean-car technology. He is a regularly featured speaker at national conventions, universities, schools and elsewhere.

Paul helped create DontCrush.com, PIA’s predecessor, a grassroots group that single-handedly prevented some 1,000 production EVs from being destroyed by the auto companies that manufactured them. His work with both groups has included campaign strategy, research, planning and execution. He is among the key figures featured in “Who Killed the Electric Car?” the 2006 documentary distributed by Sony Pictures Classics, and has been filmed and consulted for the follow up, "Revenge of the Electric Car" (slated for a 2011 release).

Paul works professionally for Santa Monica Nissan as an EV Specialist selling the new LEAF EV. He also works as a consultant for SolarCity, the nation's leading residential solar installation firm. He owns a 2002 Toyota RAV4 EV, which he drives on sunshine generated by the photovoltaic panels on his roof in Santa Monica. Paul is President of the Electric Vehicle Assn. of Southern California and a founding board member of Plug In America. 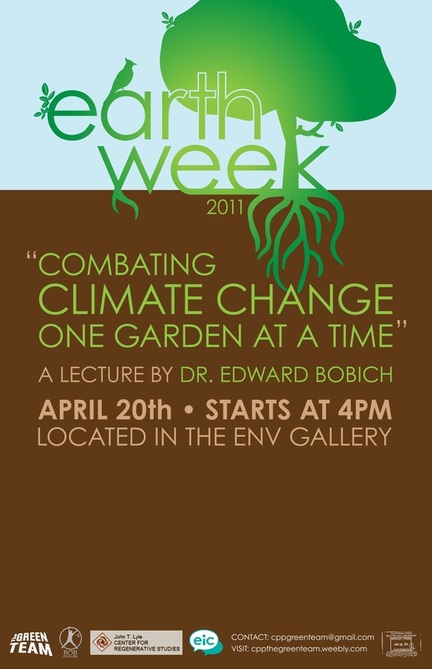 Lecture: "Combating Climate Change One Garden at a Time" by Dr. Bobich of the Biology Dept.

This lecture will discuss the environmental hazards of removing native vegetation and what people can do to fight climate change in their yards! 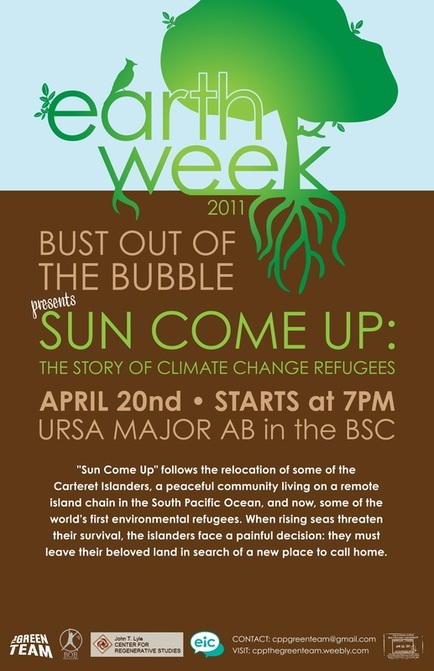 Bust Out of the Bubble presents: "Sun Come Up"; 7pm Ursa Major

About: Sun Come Up follows the relocation of some of the the Carteret Islanders a peaceful community living on a remote island chain in the South Pacific Ocean, and now, some of the world’s first environmental refugees. When rising seas threaten their survival, the islanders face a painful decision: they must leave their beloved land in search of a new place to call home. The film follows a group of young Carteret Islanders led by Nick Hakata as they search for land in Bougainville, an autonomous region of Papua New Guinea 50 miles across the open ocean. The move will not be easy as Bougainville is recovering from a 10-year civil war.  Many Bougainvilleans remain traumatized by the “Crisis” as the civil war is known locally.  Yet, Sun Come Up isn’t a familiar third world narrative.  Out of this tragedy comes a story of hope, strength, and profound generosity. 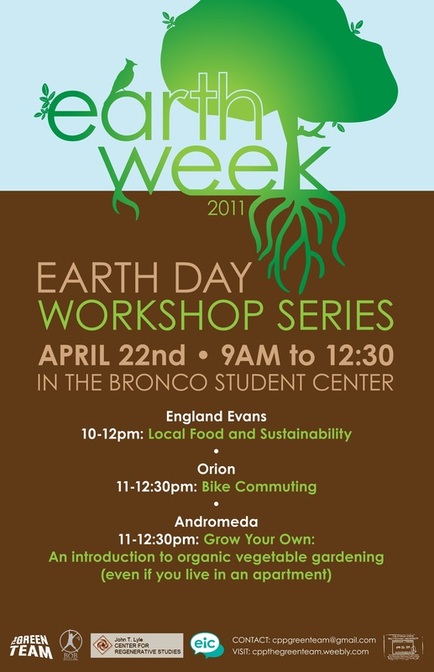 Grow Your Own: An Intro to Organic Gardening
(even if you live in an apartment!!)
11-12:30pm, Andromeda 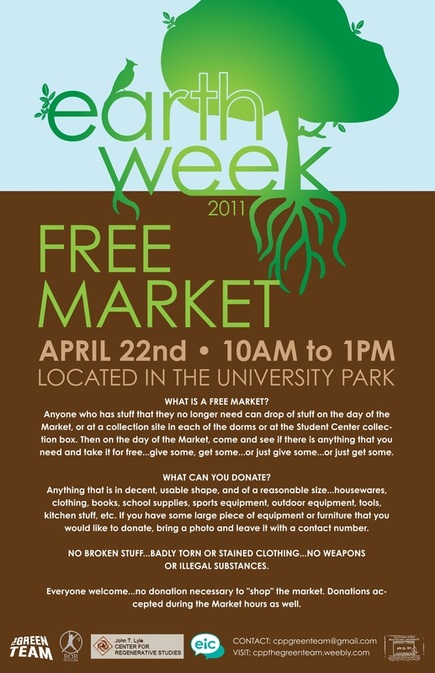 What is a free market?
Anyone who has stuff that they no longer need can drop of stuff on the day of the Market, or at a collection site in each of the dorms or at the Student Center collection box. Then on the day of the Market, come and see if there is anything that you need and take it for free...give some, get some...or just give some...or just get some.

What can you donate?
Anything that is in decent, usable shape, and of a reasonable size...housewares, clothing, books, school supplies, sports equipment, outdoor equipment, tools, kitchen stuff, etc. If you have some large piece of equipment or furniture that you would like to donate, bring a photo and leave it with a contact number.

Everyone welcome...no donation necessary to "shop" the market. Donations accepted during the Market hours as well.
Powered by